I saw a very interesting news on NDTV 24 x 7 Witness which was a real eye opener to the heights wildlife trafficking in India has reached. The so called smaller news are lost in the big headlines of yet another shot at cheap politics by Raj Thackeray or Mamata Banerjee pushing West Bengal back by some decades or Nature’s fury unleashed in Bihar. But this yet another poaching news quoted below shows the status and condition of wildlife in India.

In a major haul, the Commissioner Police on Monday seized 53 ivory antiques at College Square in Cuttack and arrested two traffickers in this connection. Acting on a tip off the Malgodown police arrested two persons Pramod Mohanty of Jagatsingpur and Kishore Nayak of Kendrapara districts allegedly accused of possessing the antiques in two bags. The articles were worth lakhs of rupees in Indian currency and would be worth crores in the international market, said DCP AN Sinha. An organised inter -State racket is suspected behind the crime and the police would take the help of the Forest Department for further investigations, said Commissioner BK Sarma.

business online? They are now no longer the villagers killing animals and selling them. They are educated and technology friendly. This guy Jeevan, a pet store owner in real life, used to advertise freely his “pets” on social networking website Orkut and buyers from all over the world used to fix their deal on email or chat rooms for any exotic bird. This criminal has been caught but obviously there are still people like him out there. There is supply when there is a demand. And when people are willing to give Rs. 1.5 Lakh for a wood owl to be used in voodoo, of course there will be sellers willing to earn money. I share the news clip here which exposes a case of cyber trafficking of wildlife in Meerut. An informative article on poaching of animals in India is available here. I found another heartrending picture of poaching for Rhino horns. How can anybody be so cruel to a mute being? 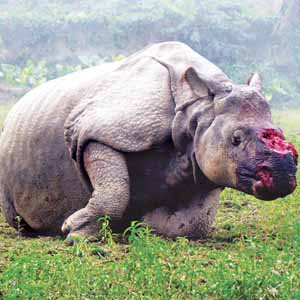 P.S. In the clip initially an ad will play and then the news starts. I have done everything to capture the streaming video but have been unsuccessful. Help is welcome.