Once upon a time, Nita had tagged me to write my take on feminism that is what it means to me. Due to laziness and lack of inspiration, I had not done the tag. But now what would be a better occasion to write the post than International Women’s Day on March 8? Wikipedia defines feminism as the belief that women should have equal political, social, sexual, intellectual and economic rights to men. Before I tell what it signifies for me, I would like to point out one thing regarding feminism. As Nita has rightly said in her post , some women do take feminism to its extreme and fail to realize that they have become misandrists (those who hate men). Similarly there are men who label their acquaintances or colleagues as “feminist” while describing as if it were a bad word!! That is wrong too. 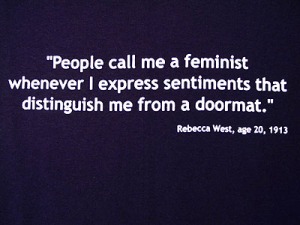 Now for me, feminism is the feeling which makes me want to be smart, to be aware, to know stuff and to not be mediocre. Its the belief  which inspires me to believe in myself, to be strong, to be confident, to be financially independent, to have an opinion and to take decisions on my own.  It is the feeling which makes me assert my right as an equal human being. It is what make me speak out against stupid sexist jokes or discrimination on basis of gender or illogical sexist traditions or religious beliefs or societal norms. I would say to me feminism is the understanding that I too am a human being with equal needs, desires, dignity and rights. 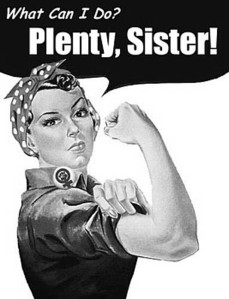 Because women’s work is never done and is underpaid or unpaid or boring or repetitious and we’re the first to get fired and what we look like is more important than what we do and if we get raped it’s our fault and if we get beaten we must have provoked it and if we raise our voices we’re nagging bitches and if we enjoy sex we’re nymphos and if we don’t we’re frigid and if we love women it’s because we can’t get a “real” man and if we ask our doctor too many questions we’re neurotic and/or pushy and if we expect childcare we’re selfish and if we stand up for our rights we’re aggressive and “unfeminine” and if we don’t we’re typical weak females and if we want to get married we’re out to trap a man and if we don’t we’re unnatural and because we still can’t get an adequate safe contraceptive but men can walk on the moon and if we can’t cope or don’t want a pregnancy we’re made to feel guilty about abortion and…for lots of other reasons we are part of the women’s liberation movement.  ~Author unknown, quoted in The Torch, 14 September 1987 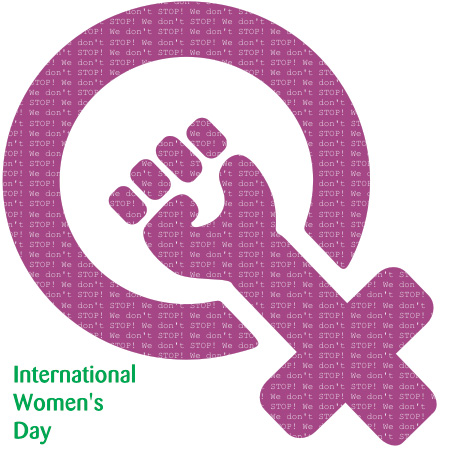 IWD is a global day celebrating the economic, political and social achievements of women past, present and future. Here are some good videos. This year the United Nations will mark the International Women’s Day on March 8 under the slogan, entitled “Women and Men: Unite to End Violence against Women.” How ironic!! Just when young women are being abused and attacked on the pretext of wearing western outfits by the so called saviours of Indian culture in the tech hub of the country.

Lastly, on Women’s Day I wish all the female bloggers whose blogs I read – a Happy Women’s Day! This is my first attempt to make a video.

Pretty women wonder where my secret lies.
I’m not cute or built to suit a fashion model’s size
But when I start to tell them,
They think I’m telling lies.
I say,
It’s in the reach of my arms
The span of my hips,
The stride of my step,
The curl of my lips.
I’m a woman
Phenomenally.
Phenomenal woman,
That’s me.I walk into a room
Just as cool as you please,
And to a man,
The fellows stand or
Fall down on their knees.
Then they swarm around me,
A hive of honey bees.
I say,
It’s the fire in my eyes,
And the flash of my teeth,
The swing in my waist,
And the joy in my feet.
I’m a woman
Phenomenally.
Phenomenal woman,
That’s me.

Men themselves have wondered
What they see in me.
They try so much
But they can’t touch
My inner mystery.
When I try to show them
They say they still can’t see.
I say,
It’s in the arch of my back,
The sun of my smile,
The ride of my breasts,
The grace of my style.
I’m a woman

Now you understand
Just why my head’s not bowed.
I don’t shout or jump about
Or have to talk real loud.
When you see me passing
It ought to make you proud.
I say,
It’s in the click of my heels,
The bend of my hair,
the palm of my hand,
The need of my care,
‘Cause I’m a woman
Phenomenally.
Phenomenal woman,
That’s me.

My Other Posts on feminist topics:-

Bias against the girl child in Indian society

Prejudice against jeans and cosmetics

43 thoughts on “Feminism and Women’s Day”