In 25 random things about me post, I mentioned that I have had a ghostly experience once. There was a huge demand by readers to know the  story. So here it goes :-

It was quite late at night and I was sleeping.  Suddenly I felt a chill and woke up. I felt someone’s presence in my room. I was too scared to move or open my eyes fully. With my eyes slightly open, I saw a little girl dancing near my bed. The chill had increased. I closed my eyes promptly and tried to go back to sleep (That is what I do when I am scared at times like a thunderstorm at night or a bad dream). I felt her come near my head and I thanked Mom  in my mind for pestering me to sleep inside the mosquito net. As I felt her coming closer, I tried harder to sleep and next thing I knew it was morning.

Few days later,when I told Mom about this incident, she began lamenting about the bag of human bones and skull (literal not figurative) we have at our home and accused it of being the reason behind misfortune and bad dreams. But I don’t believe in such superstitions. And maybe it was all a very realistic dream.

Bag of bones and skull?? Yes you read it right. An actual bag of human ulna, radius, tibia, femur and the whole paraphernalia. 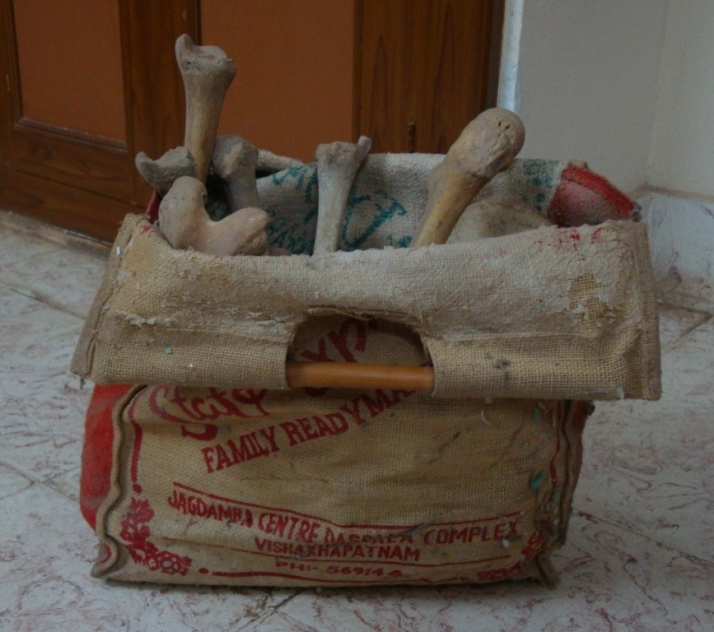 The Bag Of Bones

The Skull - cut from top for studying

Now you must be thinking why on earth do we have that at our home? Its certainly not decorative and is absolutely scary and grotesque.

My sister is a doctor and doctors study Anatomy of the Human Body as one of their subjects during M.B.B.S. So like any other medical student, she had bought this skeleton to study. She was unable to get rid of it by giving it to any junior. So she brought it home much to the horror of our Mom.

Once in a while, the contents of the bag used to be basked in the sun on roof  with utmost precaution so that neighbors roaming on their roofs do not mistake us for some occult-black magic- practicing family and helicopters  or aeroplanes flying overhead do not send police squads over to our house. We thought of throwing the bones away but we didn’t want another Nithari Scandal. Now since few years its kept in our store room due to lack of any takers.

Now in the days of Web 2.0, shall I put it up for sale on EBay? Maybe I will make a Facebook group about “How to get rid of a bag of human bones”. 🙂

Asking Dad to bring it down from store room just because “I want to take its picture” amidst vehement protests from my Mom is another story in itself . 🙂

Edited to add :- Sister says “I did not give it away not because i couldn’t find any takers, but because I was very fond of it! I had to guard it well from my greedy juniors, who had all intentions of getting it from me for free. In fact, I took pity on a junior from Andaman, and gave her a few bones and the skull, supposedly for a few weeks. But she refused to return it for almost a year, and when she did, half of the bones were gone, and the skull was cut – I had refused to cut the cap off, as it was such a beautiful whole skull. I used my friends’ cut open skulls for studying the interior.
After my poor bones were lost and cut and mutilated, I was very sad, and moved them to home for safety in future. With time, I moved from place to place, and it was not practical to take the bone set with me, so it stayed home. I have come so far, and have been away from it so long, that now I feel I can give it away. I am still fond of it, but I know when it is time to let go of something. :(”

Yes…there is one odd ball in every family 😀

37 thoughts on “Ghost Story and Bag of Bones”