I had been very disappointed when the release of Harry Potter and Half Blood Prince was postponed to July 2009 from Nov 2008. The movie was released world wide on July 16 but it hit the theaters in my city on July 17th and that too in Hindi (in the whole of Chattisgarh in fact). Even then I was determined to see it as soon as possible.

So on 17th, I suppose for the first time in the history of my college, two lecturers made excuses to leave early to go to a movie hall. They were joined by another friend outside, with whom they went to see Harry Potter and The Half Blood Prince. In the gang leader’s defense, she is a huge fan of Harry Potter and she had no class that day 😀 😀

The theater was full of students and many from our college! Apparently we were not the only ones who “bunked” college. Now for the review of the movie :- 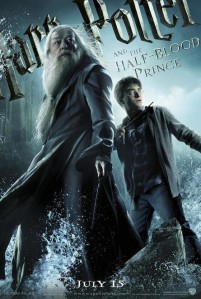 The story :- Sixth Year at Hogwarts. The Death Eaters are penetrating into the Muggle world also. Headmaster Dumbledore manages to entice Prof Slughorn back into the school as the Potions Master. The real motive is to gain a memory from the Professor which will reveal more secrets about Voldemort and probably the way to kill him for good. Also Harry gets an old Potions book of an ex student who called himself the Half Blood Prince. Further romance is everywhere at Hogwarts except in Draco’s mind who is now a boy with a mission.

The acting :- Daniel, Rupert and Emma have matured into quite good actors. So has Tom Felton (Draco). Jim Broadbent (Slughorn), Michael Gambon (Dumbledore), and Alan Rickman (Snape) have done excellent work too.

Should I add spoiler alert?? I mean most of the people KNOW the ending and other details!!!

2. Awesome special effects and execution of some scenes.

1. Lack of flow and pace in the story. There is sometimes a sort of gap between subsequent scenes.

2. Viewers are used to a fight scene at the end in most of movies. Its essential for the story to build up and culminate in a good climax. But in this a fight is shown at the Burrow whereas it isn’t there in the book and the fight at Hogwarts at the end is skipped making the ending somewhat damp.

3. Though some may not agree, I feel Snape, Lupin and Tonks could have been given more screen time. I like Tonks 😀

4. The movie focuses on love and romance for 80% of its run time. Rest of it save the movie from becoming a typical teen flick.

5. Very less focus on Half Blood Prince and the importance of the apparent betrayal by Snape.

6.Very less magic and too much of romance.

But of course I would have enjoyed the movie more

# if it had been in English,

# if there had been no unnecessary hooting every time a girl came close to a boy (even girls were doing it!! what has the world come to?),

# if the crowd had read the books prior to watching the movies and didn’t keep commenting,

# if the sound system of the theater was better and I didn’t have to strain my ears to hear the dialogues.

I swear by the time Harry Potter and The Deathly Hallows Part 1 releases I will be somewhere where I can watch it in peace.

61 thoughts on “Harry Potter and The Half Blood Prince”