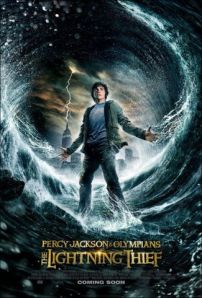 Percy Jackson and  The Lightning Thief :- Zeus’s lightning bolt has been stolen. Zeus accuses Poseidon that his son has stolen it and sets a time limit before which it must be returned;else there will be war. Meanwhile a teenager Percy Jackson (Poseidon’s son) discovers that he is a demigod (son of a mortal and a Greek God) and is the suspected Lightning Thief. Also Hades kidnaps Percy’s mother and asks for the bolt in return. Thus begins Percy and his friends’ journey to rescue Percy’s mom from hell and to prove his innocence to Zeus at Mount Olympus.

Riding the wave of making movies out of successful fiction/fantasy books, 20th Century Fox decided to adapt the first novel in the Percy Jackson & The Olympians series by Rick Riordan. Direction by Chris Columbus (who by the way directed Harry Potter movies way better than David Yates) and actors like Sean Bean, Pierce Brosnan, Uma Thurman raised the expectations from the movie.

But, sadly, the movie disappointed even a hard-core fantasy fan like me. It was too absurd and too “Hollywoodish”. The famous actors looked awkward in their roles. I am sure they must feeling the same too! The story had few discrepancies related to original Greek mythology.The special effects were just okay.

Watchable only by fantasy lovers. Unbearable for rest. Overall rating – 6/10.

The Princess and The Frog :- Walt Disney Animation Studios have retold the classic fairy tale of The Frog Prince with a twist. The story is set in New Orléans where Tiana is a hard-working girl who works as a waitress and hopes to have her own restaurant one day. Meanwhile Prince Naveen (why on earth did they keep an Indian name?) is transformed into a frog and meets Tiana. He offers Tiana money in return for a kiss which would transform him back. But what happens after Tiana kisses him?

To know that watch the movie which had got nominated in Best Animated Feature Film of the Year in the 82nd Oscars. Nice animation, good story and wonderful music & songs. Overall rating – 9/10. ( No one can beat Pixar and their animation movies! 😀 )

Alice in Wonderland :-Alice Kingsleigh, a 6 yr old girl, thinks of her adventures in Wonderland (actually Underland) as mere dreams. 13 years later, she returns to the weird and magical place by falling down a rabbit hole while chasing a rabbit in the middle of being proposed!! She learns that she is fated to end the Red Queen’s reign by killing the dragon called Jabberwocky. But is she able to accept this destiny forced upon her? Is she able to become the Champion of the White Queen?

Another Walt Disney production but this time a mix of animation and live action. Another movie as an adaptation of a famous book. Johnny Depp has done a good job as the Mad Hatter, though he has repeated bit of the mannerisms of Captain Jack Sparrow. Helena Bonham Carter (aka Bellatrix Lestrange 😀 ) as the Red Queen has done a splendid job; especially the way she said the famous sentence – “Off with their heads” 😀 Mia Wasikowska as Alice is quite dull and could have done a better job.with more spunk and emotions!

There is nothing new in the story. You can easily guess how the movie will develop and what will be the ending within few minutes of its start. The script is weak and lacks that charm, that suspense, that climax,that adventure ; all of which make a superb movie. But still it is a visual delight and it is quite funny at places too. Somehow I liked the movie. 🙂

Must watch at least once. Overall rating 8/10.

22 thoughts on “A Thief,A Frog and Wonderland”