Watched the movie on the first day of its release!! 😀

The Story :- Dumbledore is dead and Harry Potter is the Chosen One…one who will defeat Voldemort. As he leaves Privet Drive forever, he knows his life’s aim now. Harry, Ron and Hermione have decided not to go back to Hogwarts this year. Their secret mission is to find all the remaining Horcruxes and to destroy them which will eventually destroy Voldemort. The first losses Harry has to suffer on this arduous journey are the deaths of Hedwig and Auror Mad Eye Moody. The first part of the finale of Harry Potter vs Voldemort is about this journey and discovery of  not only Horcruxes but also of themselves; not only facing dangers like never before but facing their innermost fears and insecurities and overcoming them.

The Movie Review :- The movie is yet another serving of David Yates’s direction. The best thing, this time, is that the movie is in two parts and has done a lot of justice to the book as compared to Harry Potter and The Half Blood Prince. Daniel, Rupert and Emma have most of the screen time and their acting is quite good. The maturity and the growing up is quite clear. One does not miss the other actors so much!! The cinematography is awesome. The animation part depicting the tale of the Deathly Hallows is a nice touch. There is one intense sensual moment and of course blood, gore and horror. Emotions of friendship, love, longing, jealousy, loyalty, loneliness, despair and of course fear have been shown portrayed wonderfully. The first part is like an adventure/treasure hunt trip with clues to solve and decipher. And of course Emma Watson as Hermione rules!!!

The flaws *possible spoilers* but then you already know the story don’t you? 😀

# The flow of the screenplay is bit discontinuous and tedious at places. The duration of the movie is 2 hrs 26 mins (and it needed that much time) but that doesn’t mean it should get boring!! The element which holds the pace of different parts of a movie together is missing in Yates direction. There should not be a single moment when the audience sits back in their chairs relaxed!!

# Harry’s friends, Hogwarts’ takeover and even Harry missing and thinking about Ginny have been ignored. In fact the only one time Hogwarts Express and the students are shown, it seems as if the movie makers thought of them at the end moment and somehow incorporated one scene in the movie out of nowhere.

# The important part about Ollivander and Gregorovitch and some other parts are hard to understand for someone who hasn’t read the book.

# The secrets about Dumbledore’s past and the way it troubles Harry has not been properly portrayed.

# One of the Deathly Hallows that Harry possesses, the Invisible Cloak, has been kept really invisible throughout the movie 😀 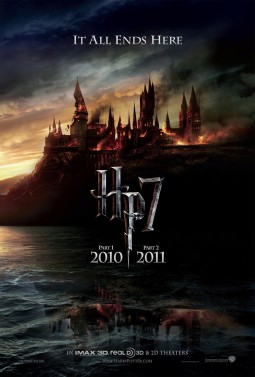 Overall, the movie is worth watching of course!! And it leaves you wishing for more and waiting eagerly for July 15, 2011 – the day of release of  Harry Potter and the Deathly Hallows Part 2.