So it has been one week since I arrived in Bangalore. Been busy cleaning and setting up new home, buying furniture (which, by the way, is way costlier than that in Pune), buying drinkable water :(, fighting rust problem (which was not there in Pune), roaming around in wonderful weather (way too much traffic than that in Pune), watching movies, meeting relatives and trying to stay connected with world through TATA PHOTON whose signal is simply horrible at the area we live. I had thought I would clear all blogging backlog – reading, commenting, replying to comments – but this damn connection! D’s office is close from here so we chose this area to live. But who would have guessed such an incident will occur with me one night!!! 😮

*Thoughts running through my head*

# but this is India so what are our options?

# thank god I am here and don’t have to worry about wanting to freshen up.

# the optimistic in me always looks for the silver lining first which was the fact that this happened while D was at home. What would have happened if I was alone and outer door had been locked too?

I went to the bathroom before hitting the sack. Clicked the central lock and turned the knob for coming out of the bathroom. Knob turned. But the metal piece DID NOT go inside. OMG!!!

Called out to D. Tried twisting and turning the knob again and again real hard. No luck.  He even tried the Daya stunt.  No luck. Then D got his tool box and started dismantling the lock calmly while I started analyzing worst case scenario.

At last D managed to disassemble the whole lock leaving a gaping hole in the wooden door. Yet the small metal piece refused to budge. D passed me my mobile and I started tweeting 😀 and taking photos for the blog post

After some more dismantling, the metal piece still refused to move out from its cavity. 😦 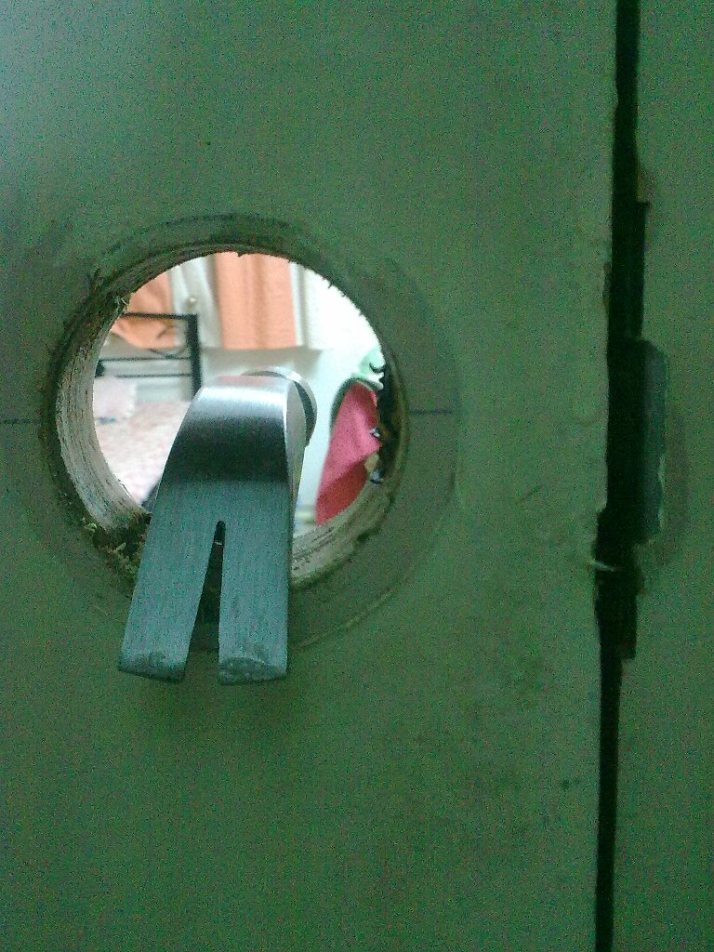 Then D used the electric drill at last to pry out the metal piece from the wood; reducing the deposit amount to the landlord significantly.

Ahhhhh! After 45 minutes of struggle, Freedom at last! I apologized to D for chiding him the time he had bought the first household item – toolbox and electric drill. 😀 😀

The last condition of the door:-

Next day, the handyman that he is, D fixed up the hole like this. He lamented about the only thing missing from his toolbox – a saw. 🙄 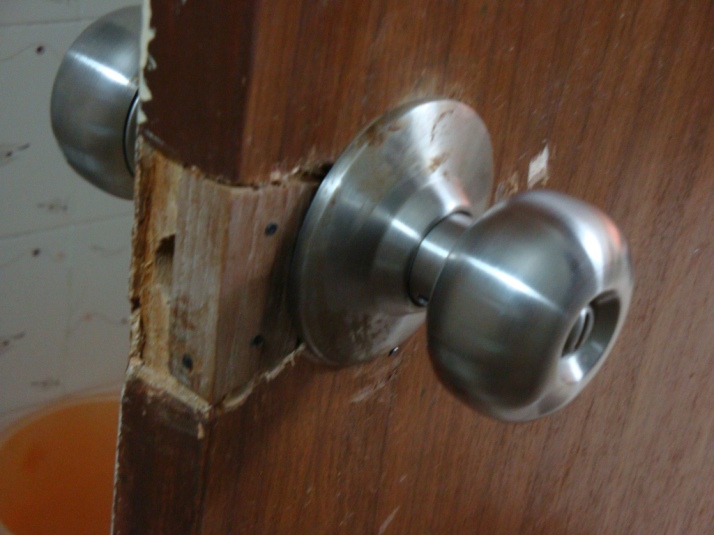 So tell me readers, have you ever got locked inside a room? If so, then how did you get out? Do share your experience in your comments!!

P.S. for the uninitiated, CID series..Sr.Inspector Daya is a character in the series who is the strongest of all the CID officers, popular for breaking open the doors ( and for jokes on the dialog “Daya Darwaza Tod Do!” ) in almost every episode and slapping the criminals.