No language can express the power, and beauty, and heroism, and majesty of a mother’s love. It shrinks not where man cowers, and grows stronger where man faints, and over wastes of worldly fortunes sends the radiance of its quenchless fidelity like a star. ~ Edwin Hubbell Chapin

Does your mother love you?

Does she care for you? Does she tend to you, comfort you, support you, provide for you, thinks for your well-being and comfort before hers ? Be the tree providing shade in the harsh sun called problems and difficulties which life gives to you?

Are you a mother and do you love your kids?

Does you care for them? Do you tend to them, comfort them, support them, provide for them, think for their well-being and comfort before yours? Be the tree providing shade in the harsh sun called problems and difficulties which life gives to your kids?

Is your mother’s love or your love for your child/children unconditional, instinctual, selfless, all-encompassing, forever ?

Does it depend on a mother’s age or salary or height or weight or color or race or nationality or clothes? Is it measurable, comparable, quantifiable?

A mother’s love is too broad, too deep a concept to be explained..it can only be felt, given and received and I don’t think it depends on any damn thing in the world. So I fail to understand the meaning of this message that is doing rounds on the Internet, being shared on Facebook and being “Liked” by people!!  I came upon it when an ex-colleague, a PhD in physics nonetheless, shared this with an extra comment “Fact of Future”. 😐 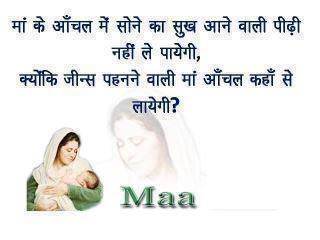 I am so appalled by the absurdity of the message and at the mentality of the people liking it and supporting it. A guy had commented on the photo’s original comment thread, agreeing with message ” Ek aurat jeans me maa nahi maal lagti hai, asli maa to sirf sari pehenti hai, yehi hamari bharatiya sanskriti hai.” 🙄 👿  And these is the common public not politicians who are always doing the foot in mouth stuff.

In my opinion, “maa ka aanchal” signifies her lap or her arm cradle which practically speaking has nothing to do with a pallu or dupatta. I asked so many questions on mother’s love to clear my understanding of the concept and I think a mother’s love, of all the things under the sun, DOES NOT depend on her clothes. Do mothers of the rest of world; where women never wore or wear sarees and salwar kurtas; love their children any less than, lets say, India?

And I have had it with “Bharatiya Sanskriti (Indian Heritage)” and the “Denim Problem” of Indian men. What the hell is the matter? I think you, who believes women should not wear jeans, jeans makes a woman appear “hot/sexy/available/inviting”, women should follow a dress code set by you, women who wear jeans are not good mothers and that mother’s love depends on her dressing, should be sent to an asylum for such deranged thinking and restricted because you are a danger to women and law and order. Who knows, you may get “provoked” by some poor girl in jeans and t-shirt one fine day and end up molesting and raping her!

Going by that picture, why no one speaks about a dress code for the fathers? Is there no dress code or code of conduct for men as per Bharatiya Sanskriti? Why are all the rules and morals for women? Does ogling/eve teasing/molesting/raping/beating/even TOUCHING YOURSELF WHILE TALKING to a woman signify Indian Heritage?

As the etymology of the idiom “wear the pants” itself signifies, men associate control with their trousers. I suspect all this hullabaloo about jeans in India actually stems from a deep-rooted insecurity in the minds of Indian men about losing their “manhood”/identity which they believe depends on who wears the pants in their household literally. They are jealous that not only women are taking over in every field but now also their clothing! There is nothing exclusive left for them now! 😀

Bah! The message is so wrong and moronic at so many levels and yet there are so many people, both men and women, in our society, educated and otherwise, who really do hold these beliefs in their shrunken, Indian heritage stricken, prejudiced minds that it is futile to rant about any further. No matter how much we shout, protest, rant, blog, comment or tweet; those who believe will continue to do so. Such are the shackles of such beliefs. There were few women on the original comment thread but not a single woman had protested. Many just ignore such stuff and comments…because it takes an effort to protest and we know in our hearts, no matter how much we argue, we can’t wipe out all such beliefs suddenly. But we should not sit quiet…with continuous struggle comes a change. If we don’t discuss and agree/disagree these issues openly, such statements and comments will continue to grow. Hence, the argument continues. The other thing we can do to bring about a change is to teach our future generations the right things.

The finest clothing made is a person’s skin, but, of course, society demands something more than this. ~ Mark Twain

P.S. I reacted strongly on that picture and my ex-colleague after giving a stupid justification removed the picture. I must also mention there were 1-2 men who had protested in the original comment thread. May there be more like them. Also got reminded of this ad..lovely ad!