As my readers may remember, I have moved to Bangalore or Bengaluru. It has been 3 months now. I haven’t started working yet and in-laws are here since two months…new place, new life, new routines were responsible for the blogging break. So, here are some random updates, thoughts and comments from the last three months of my blogging break. Hence the title… a new “My Random Thoughts” BREAK KE BAAD 😀

END_OF_DOCUMENT_TOKEN_TO_BE_REPLACED

This post was destined to be a movie review post but due to bad Internet connection, laziness, busy life and travel it got delayed and more delayed till it has now become a casual bulleted post giving my readers some random updates instead of a post having paragraphs. Sigh!! Such is the influence of Twitter. But then brevity is the soul of wit! 😀 But this is not a funny post either. Sigh!

END_OF_DOCUMENT_TOKEN_TO_BE_REPLACED

Actually this is a part of my Summer Vacation series but as it needed a special mention I didn’t title the post as Part 2.

7th June 2009 :- Arrived in Pune and after a lot of hotel search, checked into one. It had wonderful surroundings..peaceful and green. And the hotel rooms were good too.

END_OF_DOCUMENT_TOKEN_TO_BE_REPLACED 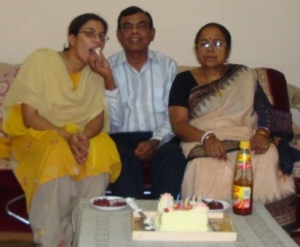 Mom seems to be lost in thought 🙂

END_OF_DOCUMENT_TOKEN_TO_BE_REPLACED

Today was my mom’s birthday. We had a simple and quiet celebration at home with the ceremonious cutting of birthday cake. 🙂 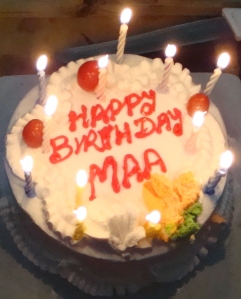 END_OF_DOCUMENT_TOKEN_TO_BE_REPLACED

Hope all of you had a wonderful Diwali. Making use of one of the perks of teaching profession i.e. 8 days long Diwali vacation, I’d gone to Puri last year. This year I went on a 3 day trip to Visakhapatnam with my parents. But more about it in upcoming posts and new header images 😀 Here is a sneak preview of what lies ahead on this blog. 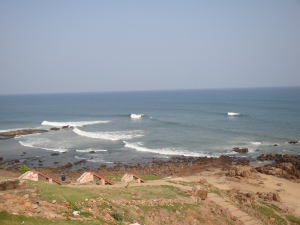 END_OF_DOCUMENT_TOKEN_TO_BE_REPLACED

After much cajoling, convincing, threatening and thinking, I decided to move to WordPress atlast. And what would be a better time to do that other than on my birthday? A new milestone for me and the birth of my blog in the WordPress Blogosphere. Hope I get all those advantages which has been promised to me by the unofficial brand ambassadors Suda, RJ, and Meghana. 😛 🙂

As I’m writing this in early morning, nothing much has happened yet to blog about. So I’ll just share a picture taken on the first birthday I celebrated in hostel. A tradition well kept but wastage of cake I tell u! Thats my senior ma’am laughing her guts out. But it was fun every year. Miss those times! 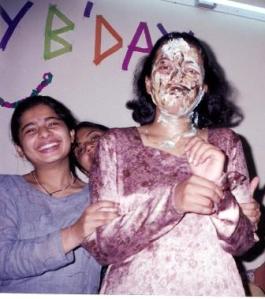 So all my blogger readers, visitors, commenters and feed readers are welcomed to this new place. Kindly update your blogroll and get my feed reader count increasing. Thanks!!!

In other news, today is my last day of summer vacation. I’ll be back to my job from tomorrow. 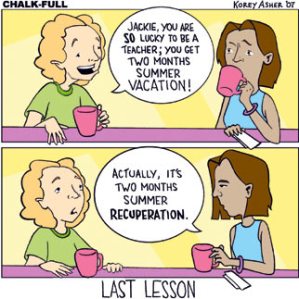 Like Loading...
Today is my Didi’s pseudo birthday. A pseudo birthday is that birthday date Indian parents (mostly fathers’ idea) put as their child’s birth date instead of real one and which is a few months or years later date and in some rare cases it can be a few months previous date. The mentality behind this practice is that the child will get extra years at service which means extra money. It is also done in case of those children whose actual birth dates fall between school session like in October,November etc so that they get admission instead of wasting one year. Then there are some unlucky ones like my Dad. He was a naughty child and always playing outside. He caught the local school’s headmaster’s eye and the headmaster suggested my Grandpa to put him in school. When Grandpa said my son is not yet of the school going age, the headmaster said nothing to worry and promptly increased my Dad’s year of birth by 1 year and admitted him to school!!! Poor Dad. Maybe thats the reason he was influenced to change my Didi’s birth date by 6 months!! Not even a year! Its like done with a mind that wants to do it and also doesn’t. Then there are some like one of my colleagues whose parents made her birth date 25 July instead of using the actual 10 July because 25 July is their marriage anniversary!! Talk about saving expenses!!

But there are so many consequences of this silly practice!!! The repercussions range from mere explanations to dealing with red tape.

1. Those who have dual birth dates tend to hide this even from their closest friends because after all its illegal and to save themselves from Q&A session.

2. Poor fellows do not get to celebrate their actual birthday and people wish them on the pseudo birthdays for years whereas they are not feeling the joy. They even receive cards & gifts on the wrong day. (But that shouldn’t hurt right?)

3. People (having read Linda Goodman) may form false impression about their actual nature and traits as they appear to belong to a sun sign and may get themselves into trouble. Like people may mistake my Didi for a paradoxical, flirtatious, talkative, breezy Gemini whereas she is a reserved, intense, mature, stubborn Scorpio. Their friends even read out wrong daily horoscopes from newspaper for them. Some friends may even chart out horoscopes and come out with wrong predictions!!!!

4. I don’t want to sound biased or generic [Amit plz note 🙂 ] or accusing anyone, but decreasing the age used to be quite common in Biharis, UPites and MPites (don’t know about present situation).There are so many uncles who have become so old (You may decrease the age but you can’t stop/delay the aging process) but are still in service. And others make fun of them or may be jealous of them.

5. And then some get retired early or get sucked in the Education System early.

6. Last but not the least, the amount of running around and bribing it takes to make a duplicate birth certificate (because the original is submitted during admission to Class 1) showing the pseudo date and Ministry’s signature for Visa and Work Permits purposes especially for Europe; causes high blood pressure, sleepless nights and hypertension and you really regret the day you lied about the birth date.

[I got carried away by the poetic/rap urge :D]

Anyway,Didi, your birthday today may be pseudo but my wishes are always heartfelt.
Happy Pseudo Birthday!!

Edited to add: This poem is an original Rimu and subject to copyright laws.

Dad, Mom and I celebrated Mom’s birthday today. Dad bought a fruitcake and Mom cut while we clapped. Then we feasted on chicken and paneer. Dad gave Mom a short and sweet birthday card meant for wife. And Mom gave him a thank you kiss on the cheek!!! So sweet and loving….I’m still thinking of what to give as gift to Mom….Missed Didi and Jiju on the occasion. Nothing much happened to ponder upon….