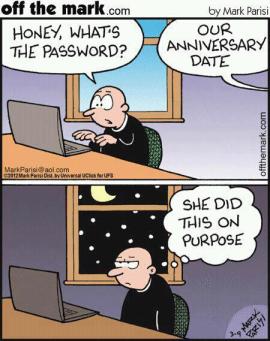 The most effective way to remember an anniversary is to forget it just once.

Husbands are infamous about being forgetful about their marriage anniversary date. Having forgetful nature in general worsens D’s case further. But he hasn’t forgotten our anniversary any year yet 🙂 Still, unlike wives who wish in their hearts that the husband would remember and plan something special for the day and give the wife a wonderful surprise and who end up disappointed, I am more of a proactive wife. I voice what I expect or want and hence no disappointments 😉

So since two weeks before the day, I had started asking D to plan something good for our second anniversary. But men love to procrastinate too!! So with just few days to go, I asked him yet again on our online chat [ He at office and I at home]

Me: How far has anniversary planning proceeded?

D: Why should I tell?

P.S. Our second anniversary was on 4th Feb 2012. This is a very late post but had to share a typical “D-ism” 🙂 D did plan something for the anniversary at last. On our anniversary morning, I received a delivery of 12 red roses, black forest cake and a card.

I too had a secret plan for the day. But my plan was ruined by the company where I had placed order. Another post to follow to warn future customers.

P.P.S Would love to hear your husband vs anniversaries tales!! Do share in the comments! Also would love to hear views from other side .. Dhiren, Bikram, Vimal, Xylene, Sharad, Prats ..do tell!

66 thoughts on “Husbands vs Anniversaries”